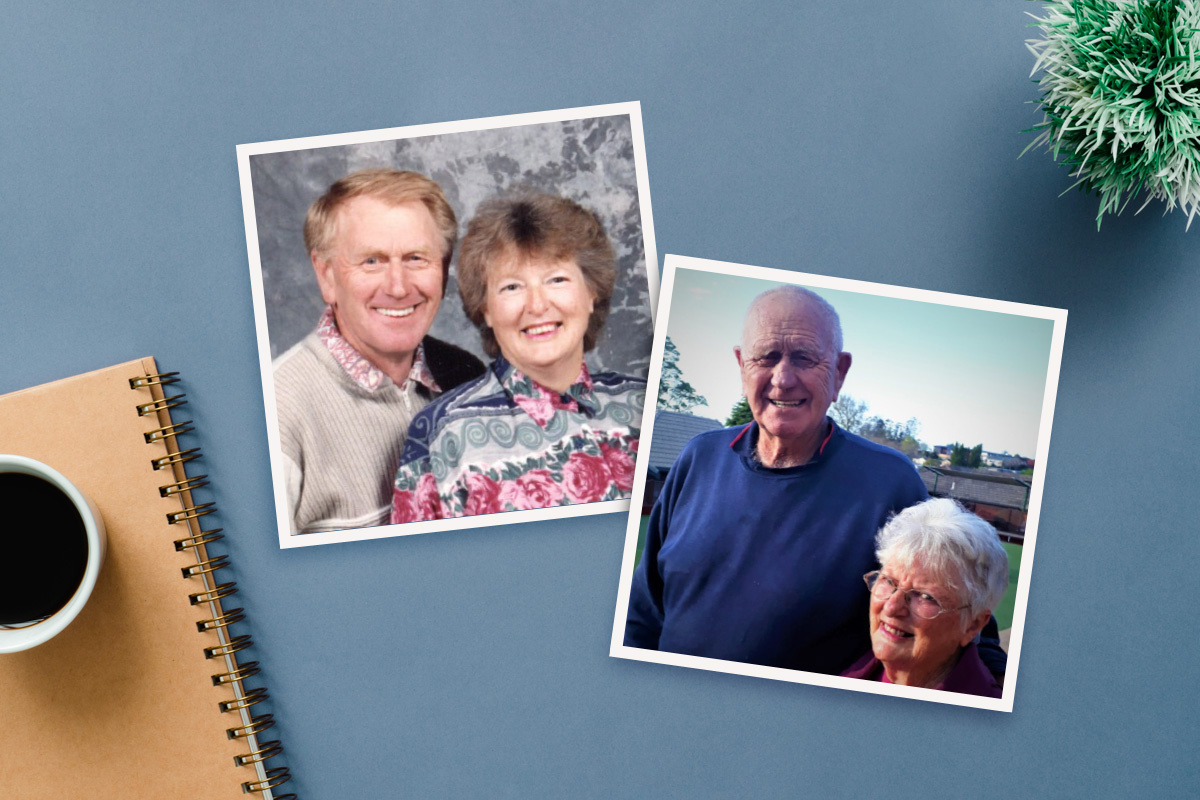 After a couple of years on his OE in England, working hard and enjoying life to the full, Brick seized an opportunity to return back to New Zealand with two others on a small sailing boat. However, it soon became apparent that the skipper was a bit of a rogue, and Brick jumped ship with one of the other crew when they docked on the Spanish Mediterranean coast. He made his way back to his old flat in north London at Bounds Green thinking that he could bunk down there for a while with the Kiwis he had previously shared it with. Unfortunately for him, his place had already been taken by a young New Zealand nurse who had just arrived to commence her own OE. Her name was, of course, Lorraine!

Obviously, there was no room for him; Brick had to find digs elsewhere. But they had caught one another’s eye. Later that year, they met again at a Guy Fawkes function; when Cupid really struck. Eventually, they found a flat and lived together for the next two years in London. Brick had been previously employed planting large mature trees in the Midlands around Coventry. He continued to do this work, this time around Heathrow and St Paul’s Cathedral.

Having completed her three year’s Nursing Training Course down at Christchurch General Hospital in 1962, Lorraine eventually decided she could easily find work as a nurse in London. She sailed to England in 1967 and, through a nursing agency, secured a position looking after the elderly wife of the British Ambassador to France, Lord Harvey. Lady Harvey’s best friend was Winston Churchill’s widow, Clementine and Lorraine became well acquainted with both of them. She was even requested to accompany them both to Lord Harvey’s eventual funeral at Westminster Abbey! This was one of many interesting jobs Lorraine had in London.

In late 1969, Brick and Lorraine returned to New Zealand. They were married in March 1970 in Blenheim, Lorraine’s home town where her parents were living. They then went north to settle in Whangarei where Brick’s family, including his three sisters, lived. During the next 25 years Brick was employed by the Whangarei Fertilizer Works and rose to become their Chief Purchasing Officer of supplies. Lorraine was quickly employed by Whangarei Hospital in their premature baby unit where she helped deliver two or more babies a day.

Many of the babies were premature because they were twins or triplets. Lorraine has very fond memories of the pleasure of successfully delivering them and the amazing names often bestowed upon the infants such as Choice, Chance, and Chosen. Another set were called Poison, Torture, and Lethal (two girls and a boy). One mother, whose surname was Hauraki, called her daughter Radio! On one occasion, she delivered a very small baby and thought that there could be one more to come. When she successfully delivered the second infant, the father exclaimed to the mother “They must have been conceived the night we managed to do it twice!”

Brick was a Foundation Member of the Ruakaka Surf Life Saving Club. He was an excellent swimmer and entered many competitions. The beach was at least 20 kilometres from his family home and so he had to cycle over the very rough roads to get there, often cadging a ride home on the cream truck.

Brick and Lorraine are blessed with two daughters. Angela was born in 1973 and now lives near Brisbane with her husband, daughter and two sons. Karen was born in 1976 and currently lives in Wellington with her husband and two boys. In 1982, they took the girls on a two week Pacific Cruise visiting Vanuatu, the Fiji Islands, and Noumea. Lorraine got involved with all the usual committees such as Kindy, and PTA. Brick became seriously involved with indoor basketball.

In 1999, with retirement looming, Brick and Lorraine bought a 10-acre block at Ruatangata to the west of Whangarei and built their intended retirement home there. The land contained a lake large enough to go boating and water-skiing on. It was a wonderful place for family gatherings. One such gathering occurred four years later in 2003 when Karen announced that she and Paul were going to be married. They decided to hold the engagement party out at McCloud’s Bay Beach. Angela, her husband and two sons were there together with ten close friends when Paul proposed to Karen on the beach. It was all very romantic.

That evening Brick complained that his foot was very sore; next morning they went to the doctor who advised that he had cellulitis. Next day his foot had turned black and Lorraine took him to the Emergency Department in Whangarei Hospital. Upon admission, the team discovered that his BP had dropped to zero and frantically performed CPR. He was diagnosed with necrotising fasciitis which is a very serious bacterial infection of the soft tissue. Unfortunately, it led to the amputation of his leg. The doctors commented that had he been shorter than his 6’ 4’’ he might well have died. As necrotising fasciitis is a tropical disease, everyone was puzzled as to how Brick caught it. Eventually, it was assumed that a vessel docked at Whangarei had taken on water ballast containing the microbes somewhere in tropical waters and had discharged that water locally when taking on cargo. Brick was the victim of a very unfortunate circumstance.

They remained at Ruatangata for several years until it became too much for them. On several occasions, when the journeyed south to visit Karen and Paul in Wellington, they stopped off to visit friends at Plummers Point. They liked the area. It was also midway between Brick’s three sisters in Whangarei and their daughter’s family in Wellington. When they discovered that a retirement village existed nearby on the Omokoroa peninsula, the decision was an easy one to make, particularly when they found that Home 8 was available. In 2009 they moved into Omokoroa Country Estate and have absolutely no regrets!

Within a year of settling into their new home, Jill Collinge asked Lorraine to join the Residents’ Committee; she was a committee member for eight years. Her proudest achievement during that time was successfully lobbying management to install automatic sliding doors at the entrance to the centre. For many years Brick assisted her in running the bar by purchasing and carrying bar stock, initially from Countdown in Bethlehem, and, when FreshChoice opened locally, sourcing it from there.

In 2019, she resigned from the committee but continues to manage the Bar Card system very efficiently. She now enjoys creating the quizzes which so often challenge all of us at social functions. Lorraine is an active participant in aquacise, mah-jong, bolivia, and indoor bowls whilst Brick is a quite deadly player of indoor bowls and in his daily snooker games.

Skills learned cultivating their 10-acre block at Ruatangata have been continued with the successful cultivation of potatoes, leeks, brussels sprout, cauliflower, broccoli, spinach, carrots, and parsnip in their garden allotment. Brick and Lorraine love their retirement life here in beautiful Omokoroa Country Estate.

And why is Brick called Brick? Simple. When he was born the nurse said to his mother, referring to the colour of his red hair, “You have a real little brickie here.” And the name has stuck ever since!